The Miller Brothers and Me

This is the opening quote from ‘Phil Miller The legacy’ website linked below for Part 1 with tribute gig music and some different pictures.

I first saw Steve Miller, the elder brother of Phil Miller, playing solo blues & boogie-woogie piano at a London Blues Society gig at the Conway Hall London WC1 on the 7th December 1968. He was on the same line up as Champion Jack Dupree, (1909 -1992)

‘…..a New Orleans blues and boogie-woogie pianist, a barrelhouse professor‘.

This is a testament to Steves standing at that early date. He more than held his own. A white, gently well spoken English middle/upper class young man. His playing excelled & it equalled Dupree’s in quality & authenticity. I was sitting on the front row, fresh from Leeds enjoying the bigger city at the end of my 1st term at the ‘Regent St Poly’ London UK.

To this day I can still recall his performance not only because I retained the flyer for the gig as I had asked for the chords of the song ‘Strange Rain’ (Tom Paxton 1962) which another performer had sang at the gig. I’m guessing either Gordon Smith or Dave Kelly. He kindly wrote them out on the back for me. I didn’t discover this for many years when I found the said flyer amongst my music after I had become a friend of Steve’s in the early 1980’s. 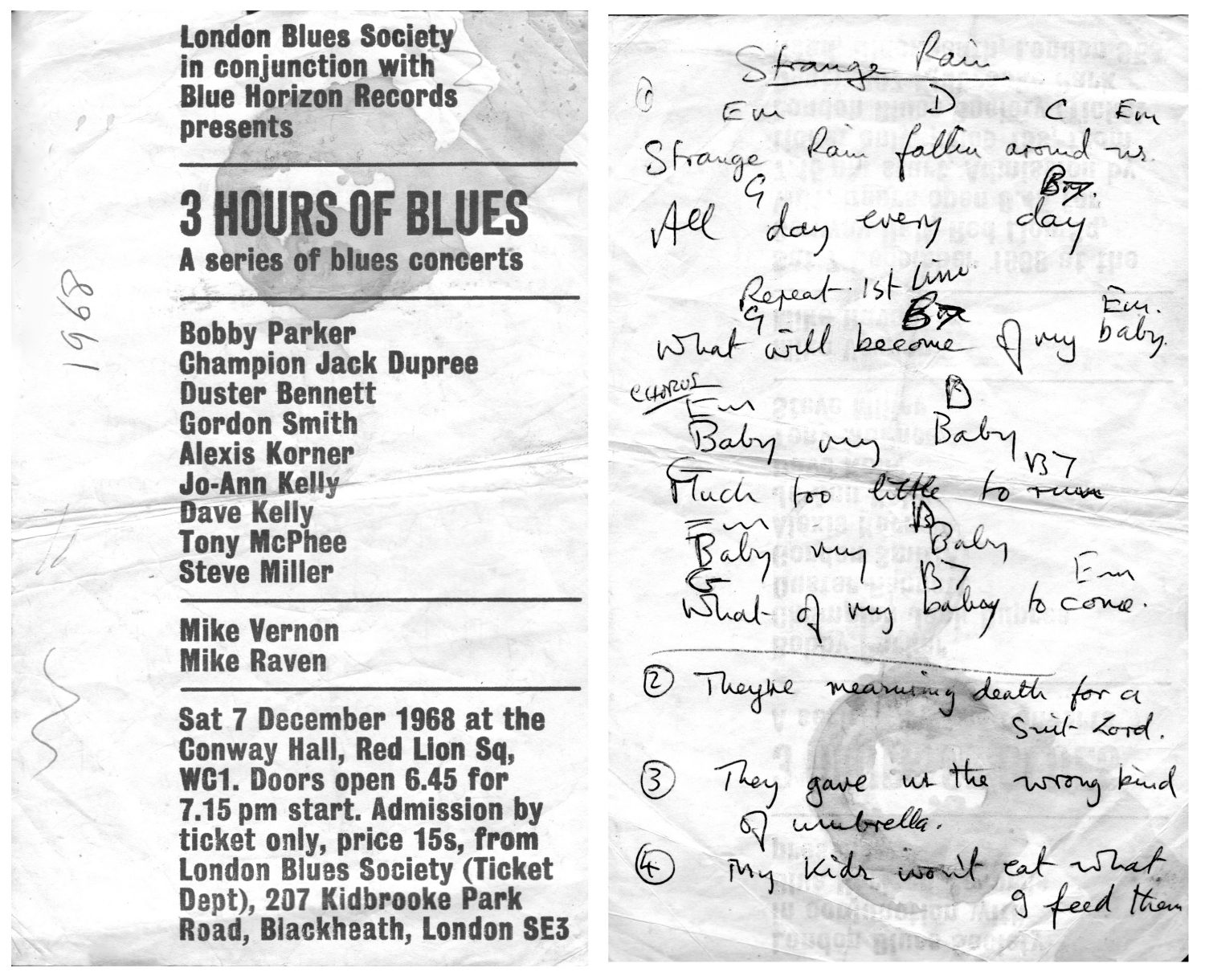 Alexis Corner was also on the same bill who greatly respected Steve’s blues piano & whom Steve performed with. Later when Steve moved into Free Jazz Steve told me Alexis did not approve.

The second time I saw Steve Miller I thought was my first. It is a strange tale of coincidences going back to my youth that brought me to the Bull & Gate public house in Kentish Town London UK around 1982 to see Phil Millers ‘In Cahoots’.

As I arrived somewhat worse for wear Steve & Mark Hewins were performing. The music was strange, very strange with Steves free form piano and Marks neck rubbing spiralling sonic accompaniment. I found it brilliant and amusing. It made me laugh out loud. There are not many kinds of music that actually make one laugh in a complimentary manner from sheer enjoyment. It was the bravado, confidence and perfect seriousness I found so amusing. Steve told me much later that he recalled that gig with somebody cackling at the back of the hall. He wasn’t offended.

My friend Peter Lemer was playing with ‘In Cahoots’ which was the reason for my presence. They weren’t bad either.

How I came to be friends with Peter Lemer is as complicated as life. It goes back to my earliest musical friendships.

I began trying to play my elder sister’s ‘Framus’ guitar in 1962 when I was 13. She didn’t mind as she only used it for posing in front of her mirror. It took me some time just to discover how it should be tuned. It was awful to play I later discovered, action dreadful, intonation bad & it didn’t stay in tune. That was all I knew when one sunny afternoon in 1973 with guests around I got up from my cushion, took it from the wall and smashed it for effect a la Townsend and Hendrix. I later discovered ‘Framus’ is a noteworthy antique German guitar maker. Yes I was also smashed & stupid.

Patrick Dean was playing Purple Haze with his ‘Sugarloo Blues Band’ on stage in 1967 at Leeds University where he was a student when I first set eyes on him. He was dating Angela a friend of mine and shortly after that at a party at Angelas, Patrick played Jimi Hendrix’s first album fresh from the record shop booth. He had only got as far as listening to the feedback and first chord at the start of ‘Foxy Lady’ before leaving said booth to make the purchase. ‘Are You Experienced’ changed everything but that’s another story.

Patrick became a journalist for the Yorkshire Post, (see the original back liner notes for the Who album ‘Live at Leeds’), where he worked with Mark Knopfler, later of Dire Straights fame. We had a jam, me, Patrick, Mark & his friend Steve Phillips. I had by then learned to tune a guitar.

In 1973 Patrick left his wife, my same friend Angela, and his life as a journalist, to join the band ‘Jan Dukes de Grey’ who had a new contract with Panda, a management company in London. So Patrick came to stay with us, my wife Valerie and I and we both got work for and from Panda. The office was in a large flat in London’s West End, Montagu Mews. Dave Griffiths was their manager & Nick Griffiths his brother was also living there. We all became friends. Nick was then working for the BBC as a recording engineer. 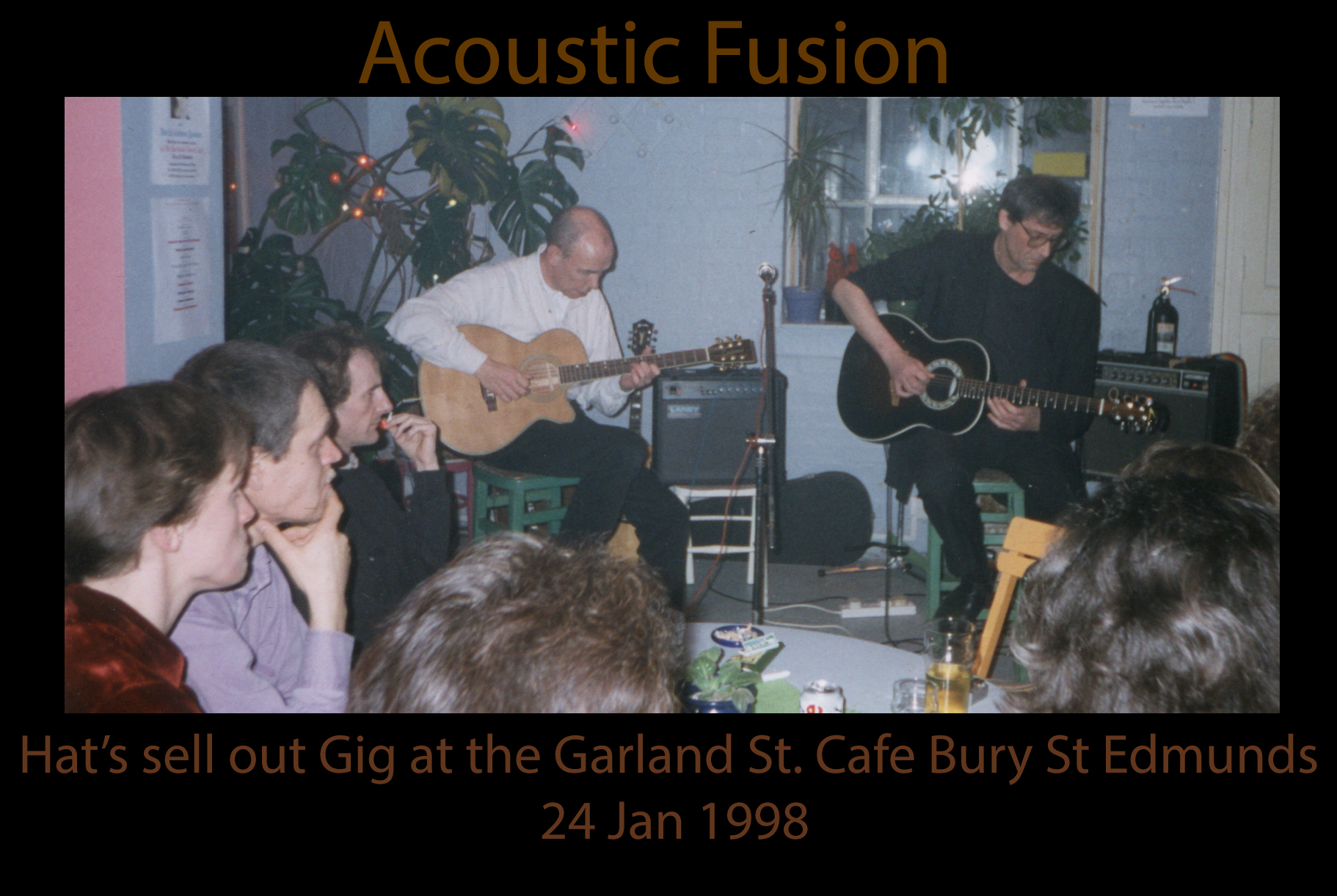 The owner of Panda management, Norman Lawrence, became the accountant for Pink Floyd around 1976. This is how Nick Griffiths applied for the job as Studio Engineer/Manager for Pink Floyd’s Britannia Road Studios then under development. The Floyd at this time were tax exiles. Nick succeeded in the appointment and put the studio together. When it was completed Nick Mason drummer of the Floyd asked him to record an album to work the studio up to a usable state. Nick Griffiths is best known for recording the kids singing ‘We don’t need no education’, the chorus in Floyd’s ‘Another Brick in the Wall part 2’ amongst other sound effects for The Wall album and engineering the subsequent tour.

Nick chose to record Peter Lemer’s band whom he had recorded at the BBC in various bands. Nick asked me to come in to meet the musicians. Well yes I would. Nick was working alone and Peter was also looking for a record cover. This is how I was introduced to Peter Lemer with Francoise Moze bass (Gong) Laurie Alan drums (who earlier had played with Steve & Phil Miller in Delivery) and later Alan Holdsworth guitar who was overdubbed onto one track.

I began photographing Peter at the grand piano at the house where he lived. The idea was to make him transparent so I photographed the piano with him naked and without him in the frame. I did experiment with using this idea for the CD cover of Peters recent release         ‘Son of Local Colour, Live at the Pizza Express Soho’    (Link to the CD http://www.espdisk.com/5031.html) 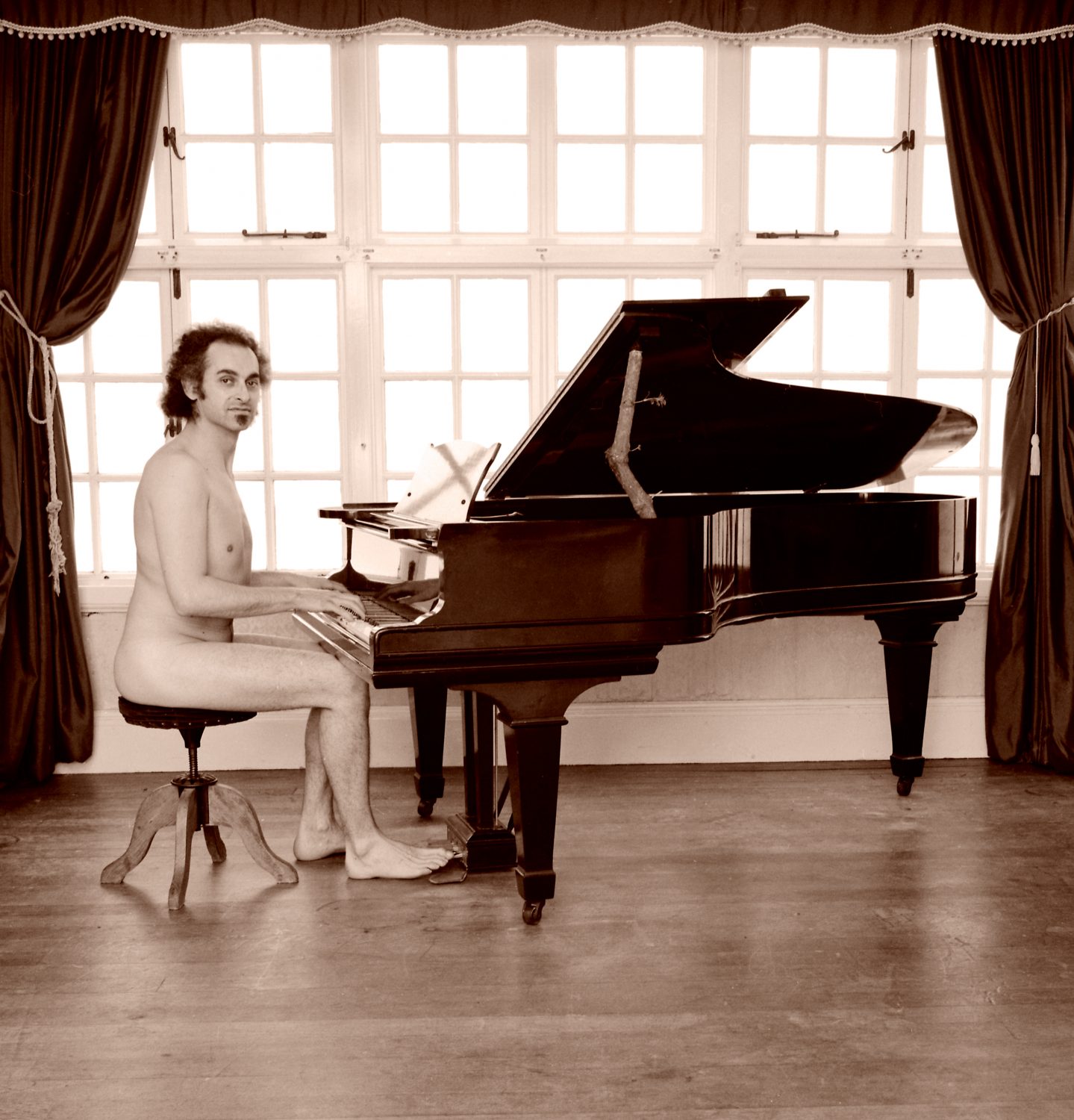 I also helped Nick by listening to the mixes he would give me on quarter inch reel to reel tape whilst I was working on the cover photo. However at that time Peter did not get a deal to release the music.

The CD ‘Peter Lemer and friends – Jet Yellow’ was finally released on 13th May 2019. It was embarrassing for me as Pete did not have any masters only some cassette copies of Nick Griffiths mixes. Nick had sadly passed in March 2005. I knew I’d had some original mixes from the 24 track but upon going through the old tapes I used on my Akai reel to reel for doing ping pong recordings of guitars I found the box but I had recorded over all the tracks. Such is fate. I did not expect to be holding masters 41 years later. 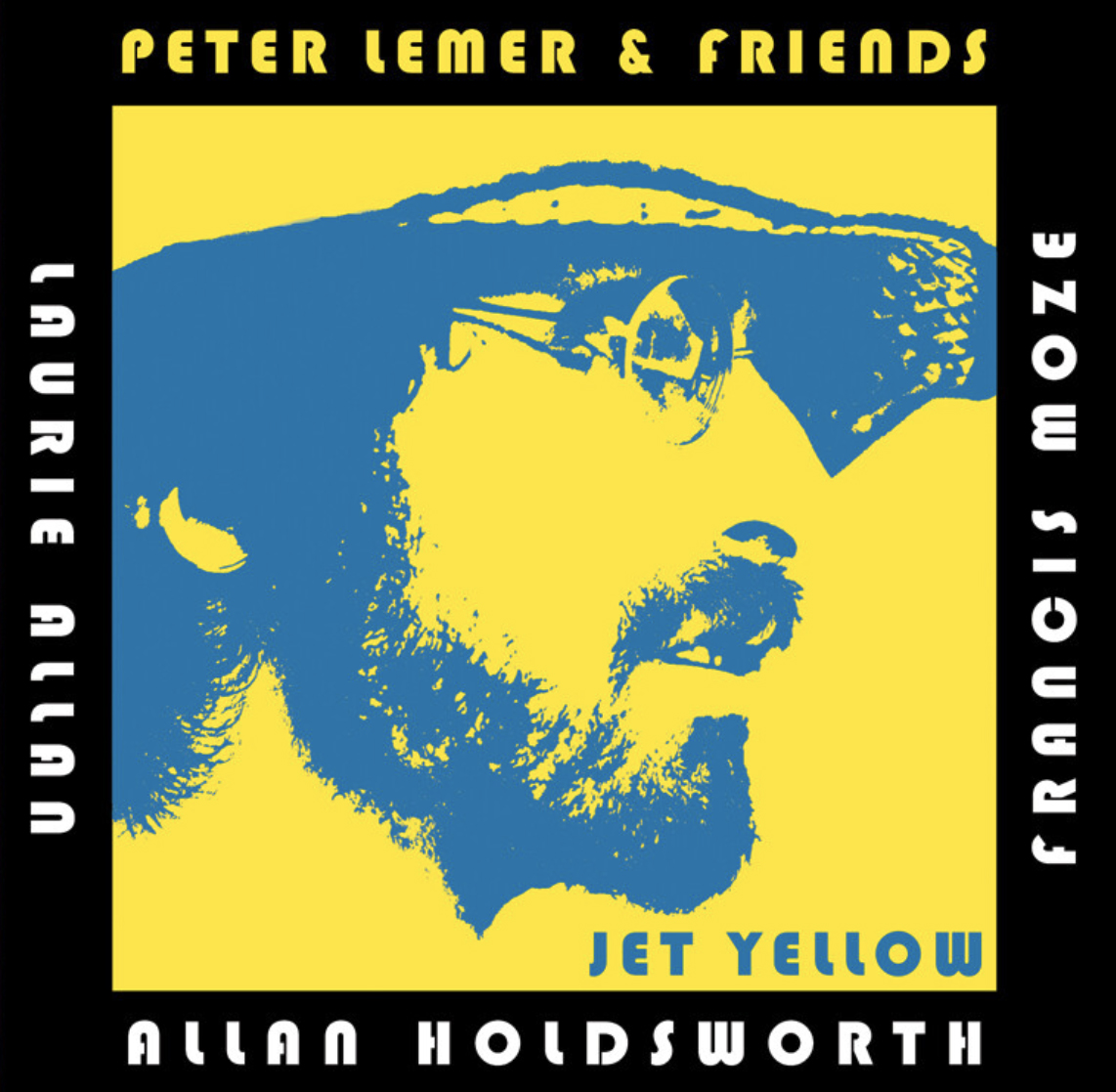 It is a beautiful fine recording not touched by time.  Listening to it now I am flown straight back to those days in the mid 70’s in my first darkroom in Belsize Park London NW3 working on my photographs.

This work for Peter was not wasted either as I used one as the piano shot for the inside back sleeve of Steve Millers ‘See Hear’ piano solo collection Phil released on his label Crescent Discs in 2002. 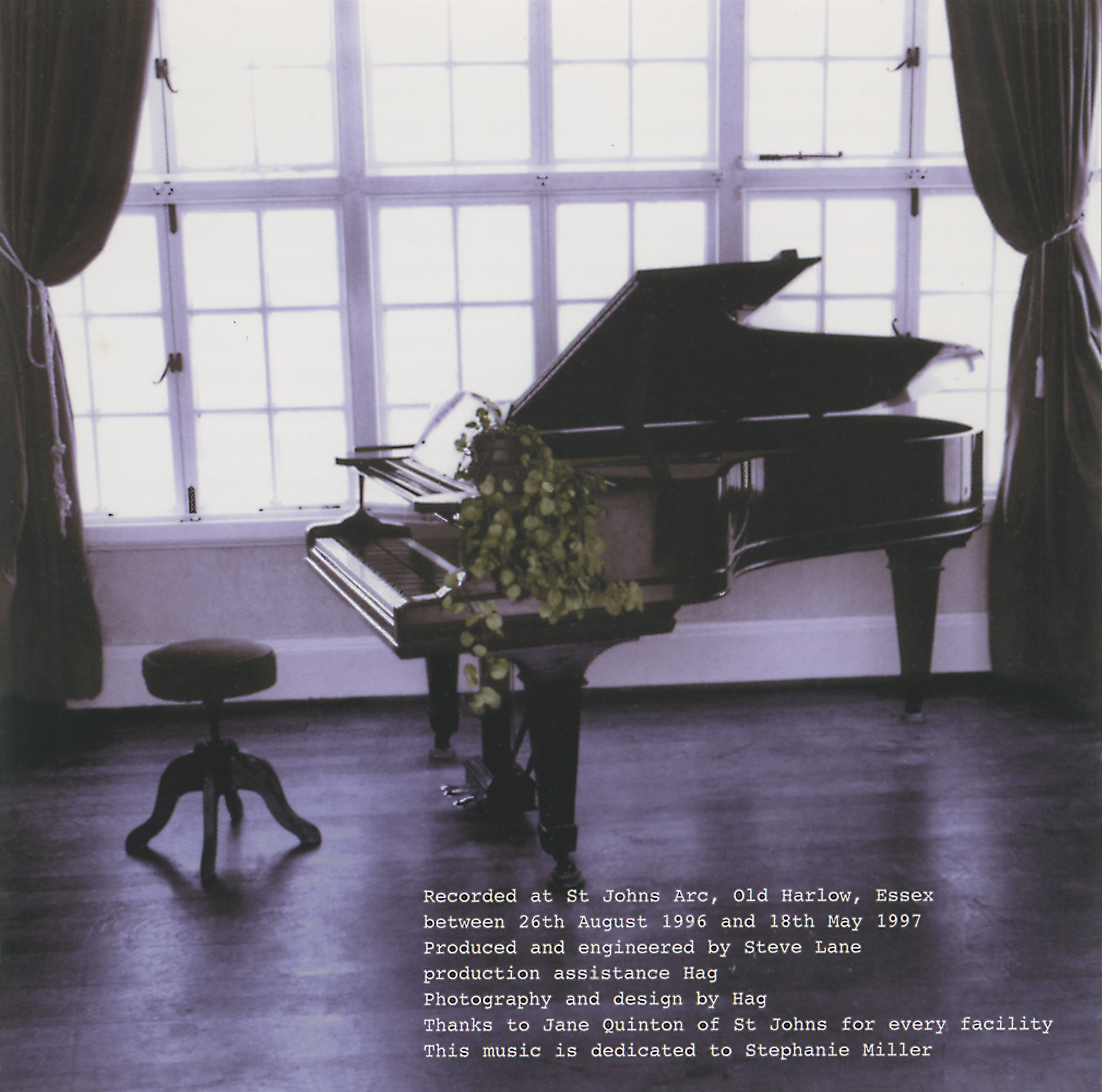 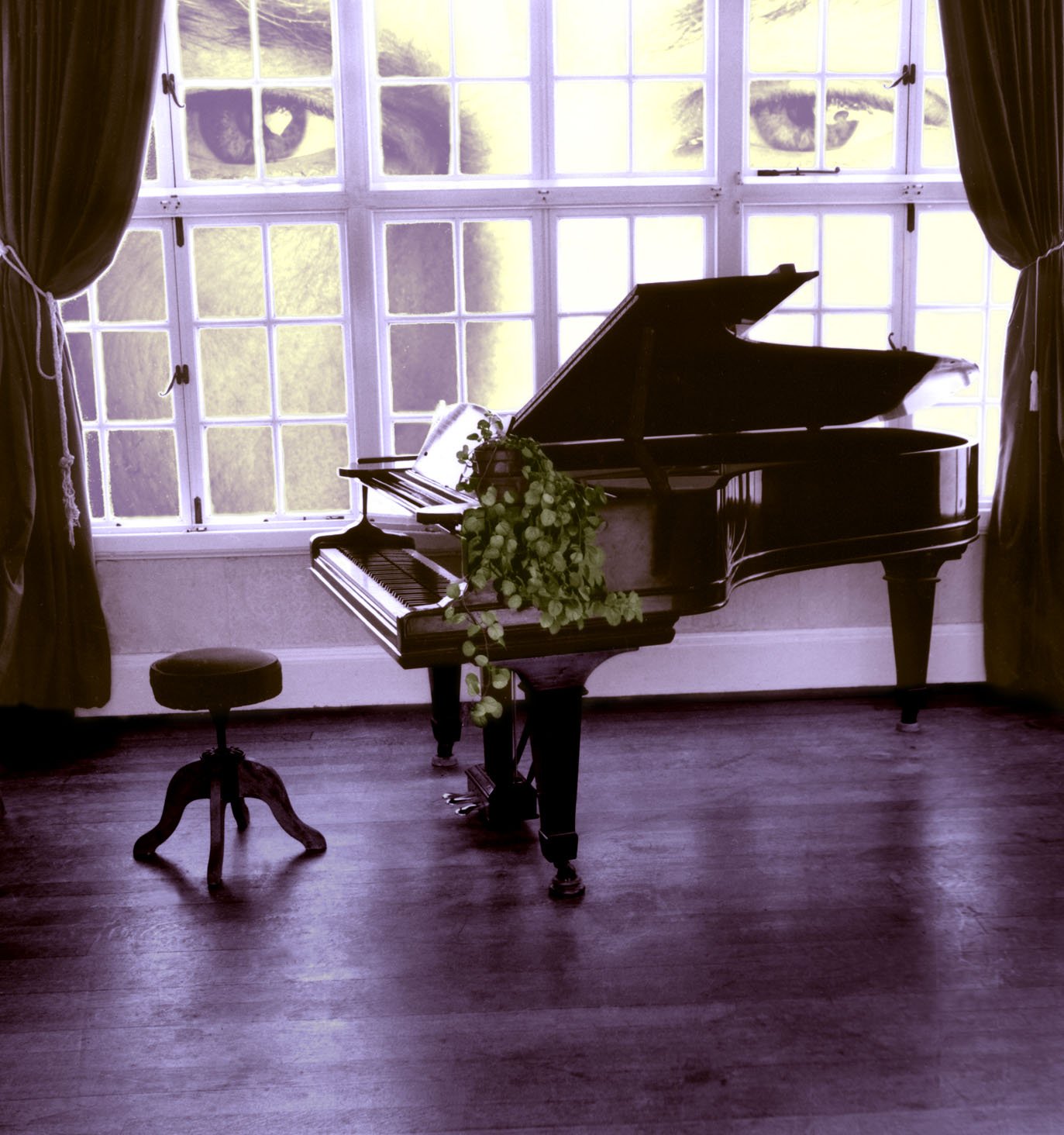 1998 with Steve looking. Version not used for his ‘See Hear’ piano solo’s CD

Steve Cooke realised after moving into Glebe that he used to rehearse there around 1971 with the band CMU which contained Roger Odell on drums who went on to form Shakatak in 1980. Steve later joined Gilgamesh which Peter Lemer, Hugh Hopper, Alan Gowen & Richard Sinclair also performed with amongst others. Steve Cook became a member of Soft Machine in 1976.

It was Nick Griffiths who had found Glebe House as he had lived on Hobbs Cross Road as a child, the opposite end from All Saints Church where Steve Miller had his workshop. (Just a few more coincidences).                   Glebe House needed woodwork so we employed Steve Miller in 1983 to build our kitchen. He carried out work for all the households at Glebe House, Peter, Nick and Steve Cooke. This is how I became friends with Steve Miller.     He came around to give a quote. We talked about music almost immediately having seen him perform with the great Mark Hewins.

I had continued to play with Patrick Dean down the years but he had now moved back north to Leeds. We had a great musical rapport based around improvisation. I loved improvising, being in the moment. Listening rather than thinking about what you’re playing. It was thus great to find somebody who just wanted to play and was local.              It wasn’t long after that first meeting before I entered All Saints Church near Old Harlow where Steve had his workshop when we went to see our Iroko kitchen coming to life. I still have elements of this same kitchen in my present kitchen, bathroom & a coffee table top 40 years later. 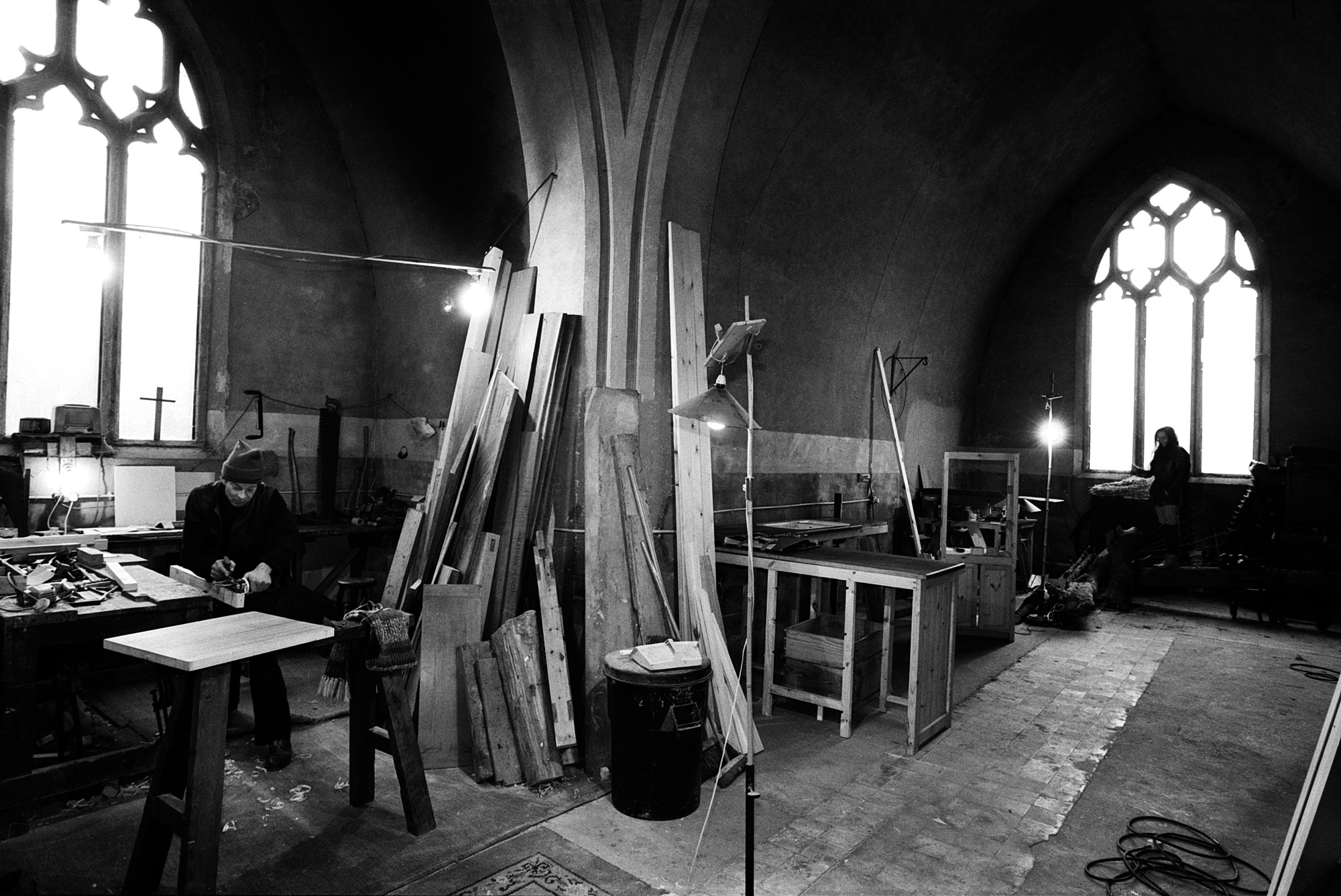 Steve was not only a craftsman of the piano he carried this over into his woodwork where he made his living. He rejected power tools and modern methods. He embraced traditional skills of sharp hand tools, no screws no glue just perfect joints & wedges. He practiced this to the extent of renovating ancient barns restoring them to their original form. 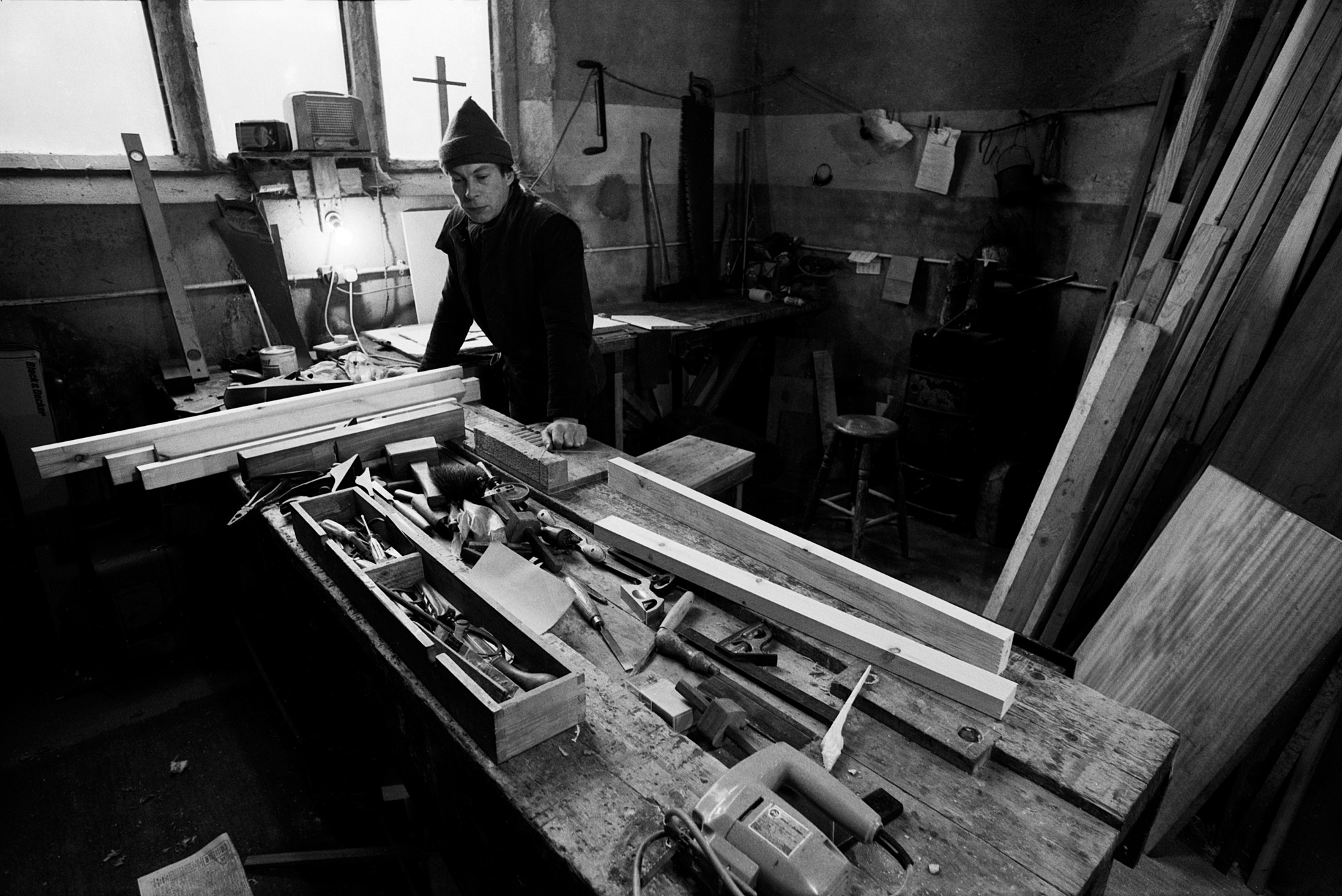 ‘A real craftsman made these boards, joined in the correct traditional manner of reversing the grain with a hard wood tongue inserted into the joint so the boards always remain flat’.

I then mentioned to him the same craftsman had a band with Robert Plant before Led Zeppelin. He looked up at me, mouth open then looked down and gave the newly joined boards a stroke. 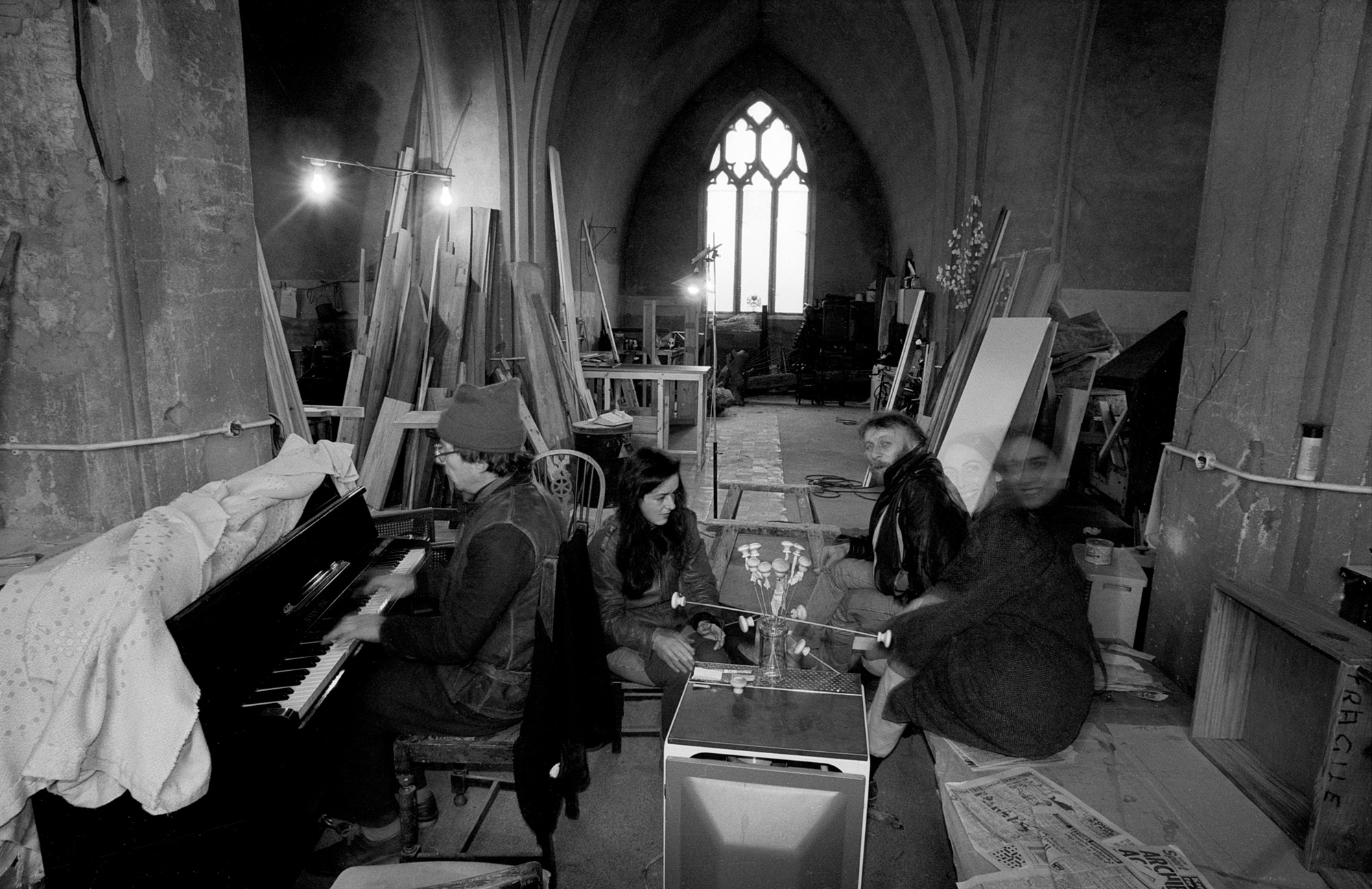 Steve plays,1983 with Min and Gillie (then known as Ishbe)

My visits to All Saints became a regular event. We played, we talked, we smoked, we drank coffee. The Miller’s father was a coffee importer and coffee was part of the ritual. To this day Steve taught me how to make coffee with nothing more than a pot and hot water. He also taught me how to make music seriously. He didn’t appreciate me slipping into amusing little riffs, rhythms or nursery rhyme’s randomly.               Steve would stop on play back. Yes these were recorded on cassette as part of the ritual. Then explain this wasn’t appropriate. ‘This is serious music and should be treated as such’. It was OK for me to be amused as part of the audience but not as the performer.

There became a desire to have a night with Steve. It crept up as a need to play. The gaps were irregular, from weeks to months, though never years. Sometimes at Glebe, sometimes at All Saints. Children for both of us arrived so demands on time and perspectives changed but always the need to play remained. 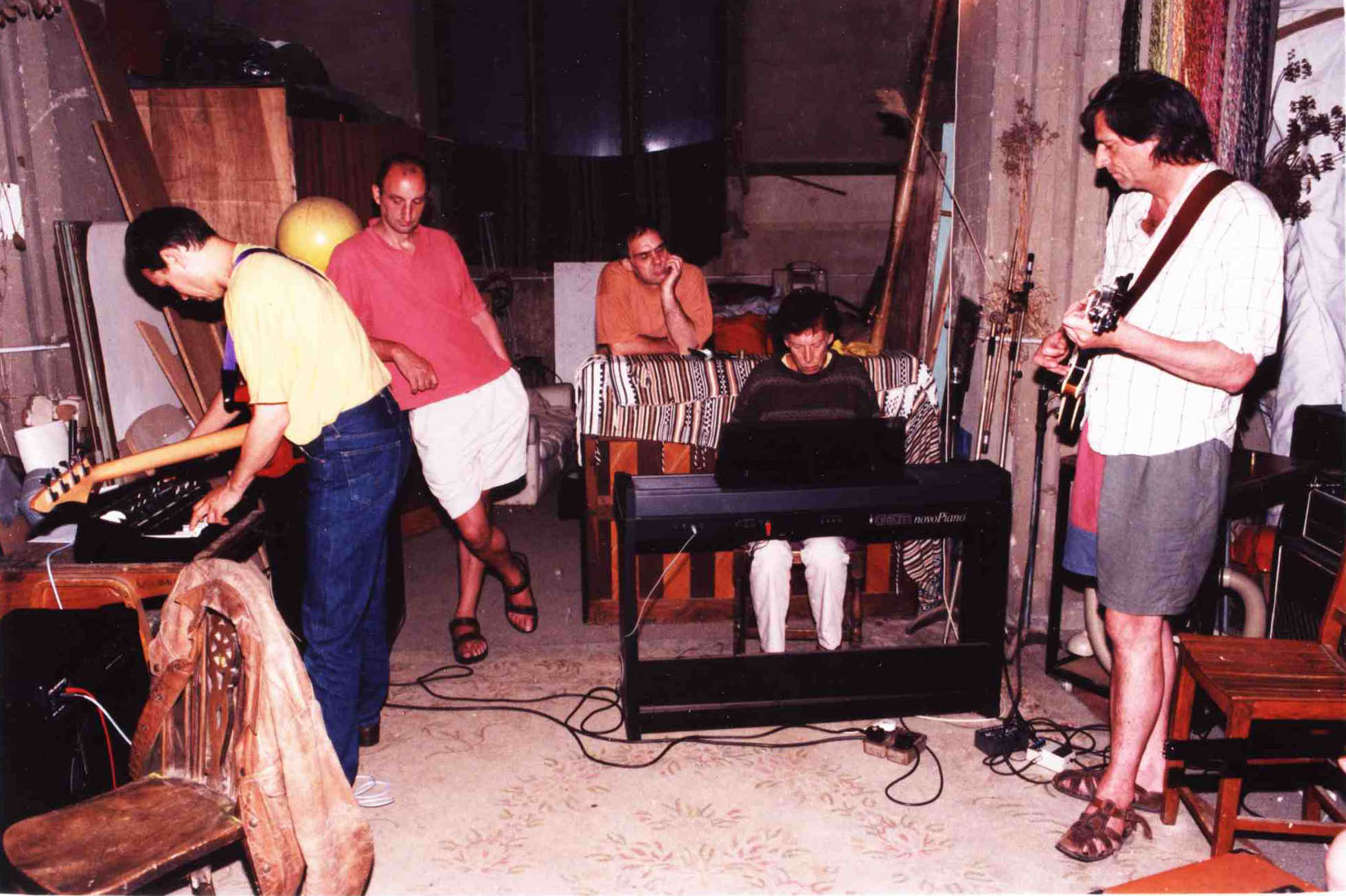 Steve and I made a cassette collection recorded from 1992 to the end of 1995 called Pantheist Dreams in my basement at Glebe with Steve playing synthesiser and one track on piano recorded at ‘The Premises’ in Hackney, London, near Phil Miller’s home.

This friendship expanded to include Phil as I went to more In Cahoots gigs. He often visited Glebe House to work on arrangements with Peter Lemer & the whole band for various things. I would peer out of my window and see Herm photographing all of In Cahoots with Pip Elton Jim & Fred.

Below is the guides/arrangements I wrote for the